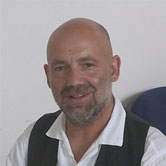 Robbie’s passion for nature began in childhood on a farm in Co Fermanagh. He later studied microbiology at Queen’s University Belfast and went on to do a PhD in molecular microbiology. He then jumped ship, became an acupuncturist and has been working in complementary health for 30 years. This has taken in him into Chinese Medicine (practice and education), clinic management, humanistic psychotherapy, and in the past decade ecopsychology and ecotherapy.

Robbie has taken his bodywork and psychotherapy practices into private, corporate and UK-NHS settings. Over the years he has developed a profound understanding of the complexity of the integration of body, psyche and environment in every sense. In recent years he sought to integrate his love of nature and his outdoor experience with his professional practice through the study of ecopsychology. Between 2014-16 he co-led ecotherapy walks for health and well-being as part Ecotherapy Kernow within the dose of nature project funded by Exeter University. Robbie is a director of Common Ground N.I. and moved back to the farm, where his love of nature began, in 2016. He is part of a small team developing nature based therapies including Horticulture Therapy and