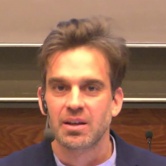 David Erritzoe qualified as a medical doctor at Copenhagen University Medical School in 2001 and currently holds an Academic Clinical Lectureship in Psychiatry at Imperial College London. Alongside his clinical training in medicine/psychiatry, David has been involved in psychopharmacological research, using brain-imaging techniques such as PET and MRI. Initially working at Columbia University in New York, he then undertook a PhD at University Hospital Rigshospitalet in Copenhagen. Since 2009, under the mentorships of Profs Anne Lingford-Hughes and David Nutt at Imperial College London, he has conducted post-doc imaging research in the neurobiology of addictions and major depression. Together with Prof Nutt and Dr Carhart-Harris he is also investigating the neurobiology and therapeutic potential of MDMA and classic psychedelics.

The Use of Psychedelics in Psychotherapy
Saturday 2 March 2019