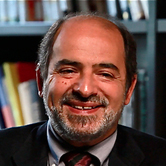 Vittorio Gallese, MD and neurologist, is Professor of Physiology at the Department of Neuroscience of the University of Parma, Italy. He is Coordinator of the PhD Program in Neuroscience. His research focuses on the cognitive role of the motor system and on an embodied account of social cognition.

His major contribution is the discovery, together with his colleagues of Parma, of mirror neurons and the elaboration of a theoretical model of social cognition – Embodied Simulation Theory.

He recently co-authored with Massimo Ammaniti the book The Birth of Intersubjectivity: Psychodynamics, Neurobiology, and the Self. (Norton, 2014).

Neurobiology and its Applications to Psychotherapy

Mirror Neurons, Embodied Empathy and the Boundaries of the Self
Friday (eve) 10 and Saturday 11 January 2014