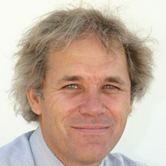 Mark Solms was educated at Pretoria Boys’ High School and the University of the Witwatersrand. He undertook postdoctoral studies at St Bartholomew’s, the Royal London School of Medicine and the Institute of Psychoanalysis, London.

He returned to South Africa in 2002 as professor in neuropsychology at the University of Cape Town. He is best known for his elucidation of the forebrain mechanisms of dreaming and for his discovery of the double dissociation between rapid-eye-movement sleep and dreaming.

He is also widely acknowledged for his pioneering work in the interdisciplinary field now known as neuropsychoanalysis, which substantially broadened neuroscientific understanding of complex psychiatric phenomena.

Solms has been widely published in leading neuroscientific and psychoanalytic journals as well as in general scientific journals. The best known of his four books is The Brain and the Inner World, which has been translated into 12 languages.

He has received many awards for his scientific and scholarly achievements. These include the George Sarton Medal for contri