Skip to content
Aetiology of borderline and narcissistic traits
MY ACCOUNT  >  Fragile Selves: Working with Narcissistic and Borderline States of Mind  >  STUDY GUIDE

Aetiology of borderline and narcissistic traits

The causes and aetiology of both borderline and narcissistic personality traits are complex and not fully agreed on. They involve genetic, brain, environmental, and social factors. However, both are strongly linked with insecure attachment (particularly disorganised attachment), early developmental issues, and issues of identity formation and ‘personality’ (see McWilliams, 1990).

In his pioneering book Into the Darkest Places: Early Relational Trauma and Borderline States of Mind (2016), Marcus West describes borderline personality states as being rooted in “early relational trauma”, and therefore require “an integration of analytic theory, trauma theory, and relational theory” for successful treatment. Similarly, while the precise aetiology of narcissistic personality types is unclear, there seems to be a strong association and alignment with early developmental and relational disruptions: child neglect, or child abuse, show up as significant risk factors, as does socioeconomic status, and there is a strong association with erratic or dysregulating parental care.

Early developmental disruptions to the sense of self might be generated by:

All of these experiences may generate significant and enduring disruptions in the way the child is being seen and attended to, which the child then internalises and models, as well as causing severe damage to their ability to emotionally and cognitively self-regulate.

There is a growing appreciation of the role of early relational trauma in borderline states of mind in particular (Herman; Perry; van der Kolk, 1989), and indications that BPD may overlap with complex PTSD (see Herman; also Fonagy et al, 1991, 2008). In terms of the importance of early trauma in the aetiology of narcissistic and borderline traits, Freud, Klein, and Jung tended to focus more on the “inner trauma” (structures, drives, etc), while Ferenczi, Bowlby, Seligman, and Rosenfeld have drawn attention to the “real-world trauma” as the crucial dynamic, a social and contextual focus that was often marginalised in early psychoanalytic thinking.

There have been various speculations as to how the psyche protects itself against narcissistic wounding (wounds to the core of the self) by throwing up narcissistic, borderline, hysteric, and schizoid defences which then become incorporated and rigidified into personality organisations (see Marcus West, 2016). In this sense, both borderline and narcissistic traits can be seen as “primitive defensive reactions” to early trauma or parenting disruptions.

Narcissistic disturbances can be generated in infancy through a number of particularly disrupting and dysregulating parenting approaches, including ignoring or shaming the child’s initiatives; making parental love highly conditional (e.g., rewarding only behaviour that support’s mothers image of the child, or discouraging contact with the father, so the child is trapped in a dyad); encouraging the child’s grandiosity, or sense of ‘specialness’; rejecting, abusing, or neglecting the child (which can generate cycles of entitlement, and grievance); and nurturing pro-narcissistic defences.

In borderline instances, reversals or ‘splittings’ are common in this early developmental situation, with the infant identifying both as ‘subject’ (to the trauma), and in reversed form, in identification with the ‘aggressor’. This latter role is often later projected onto a new partner (or parental figure), thus re-binding them to the object. “This reversal of the original experience is one of the elements that causes the conflict characteristic of borderline functioning, both alienating the individual from themselves and preventing the development of a coherent identity” (Marcus West, 2016).

Recognising the various “internal working models” generated by the trauma, and accepting them on various levels (relational, internal, historical, and archetypal), is considered a highly effective therapeutic way of helping the individual to manage and integrate these internal disruptions. As van der Kolk notes, “Trauma is, by definition, an experience which the individual psyche cannot bear, contain, or integrate at that time” (van der Kolk, 1996b).

Mucci has observed that “inconsistent attachment is an important element in the aetiology of the disorder” (Link to Talk). This again points to the crucial role that early relational issues play in the development of these pathologies: issues of attachment, relationship, and the lack of sufficient emotional and ontological attunement. Alan Schore’s pioneering developmental model (interpersonal neurobiology, or ‘IPNB’) in these early relationships is especially helpful in better understanding the mechanisms involved, and how they manifest as incapacity to regulate, as well as generating negative affect and low self-esteem.

Disruptions to the sense of self that are not successfully regulated by the mother or primary caregiver can lead to the formation of a ‘fragile’ self, as well as to a lack of cohesion of the self. As Mucci explains, this inconsistent mothering can disrupt the infant’s early affect regulation: “Narcissistic mothers are more concerned with their own emotional needs than the child’s”, which may result in both under-stimulation of the infant and also “a kind of over-stimulation” or “hyper-arousal”. In these instances, “mothers are intrusive and controlling instead of mirroring and containing”. Thus, in the separation/individuation phase, the mother ‘rewards’ the child’s growth only in relation to her own needs: when the child is in a positive, grandiose state, mirroring her own narcissistic needs, the mother is emotionally accessible, but does little to modulate and contain the child’s affect. The mother can either ‘fail to modulate’ the infant, or may hyper-stimulate it. Mucci shows how these failures of modulation can manifest on a neurobiological level as significantly increased levels of cortisol in the infant, which may impair and indeed damage the child’s developing immune system (Link to Talk).

The attachment aspect to borderline and narcissistic traits was outlined by Fairbairn in his important analytic and theoretical contributions. In Fairbairn, Freud’s early ‘libidinal’ theory is replaced by a more relational or attachment theory: narcissism is not seen as a fundamental drive (e.g., a drive for release, or to discharge), but rather as a desire for an object, one that is the key to the aetiology (the infant wants comfort, nurturing, safety).

As Celani remarks, attachment is paramount in Fairbairn’s model as he recognised that children are absolutely and unconditionally dependent on their parents (Link to Talk).

Mollon also explores the deep structures of these states and their developmental origins, questioning the very nature of ‘self’, and exploring the illusory identities that often structure our experience. He notes that malign narcissism that can sometimes reside within the psychotherapeutic endeavour itself: by understanding the precise internal structure of narcissism, and how it imprisons the person in its illusions, he shows how therapists may be better positioned to help (rather than further injure) the client who presents with these problems (Link to Talk).

Celani examines and draws on the psychoanalytic theory of object relations in his penetrating analysis of borderline and narcissistic types, showing how object relations theory is a particularly helpful structural theory in these cases. At the heart of his model is a structural theory that organizes relational events into three ‘self-and-object’ pairs: one conscious pair (the ‘central ego’, which relates exclusively to the ‘ideal object’ in the external world) and two mostly unconscious pairs (the child’s ‘antilibidinal ego’, which relates exclusively to the ‘rejecting’ parts of the object; and the child’s ‘libidinal ego’, which relates exclusively to the ‘exciting’ parts of the object; see Link to Talk). The significant role of ‘objects’ is highlighted in the mental structure of these identities, focusing on the structural mechanisms of dissociation and repression: 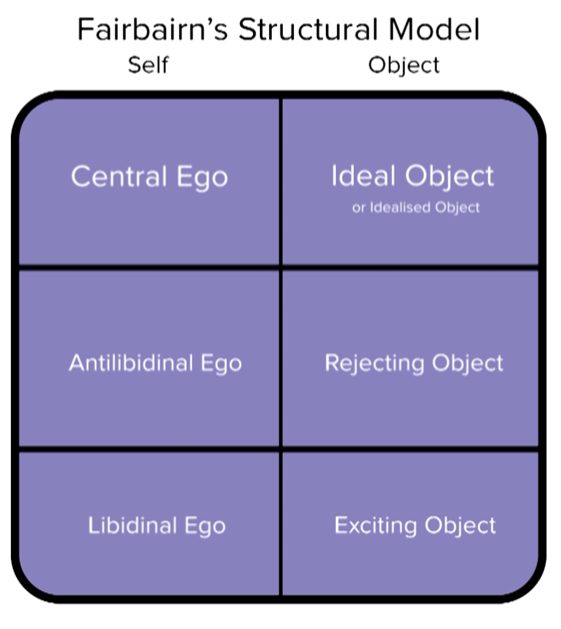 Celani shows how these are shifting states: the patient can shift from one to another, denying the previous state, which can be confusing for the therapist who is not aware of this mental structure. As he suggests, Fairbairn’s central defence mechanism, splitting, is the first shift from ‘central ego’ dominance to either the libidinal ego or the antilibidinal ego.

The ‘thick-‘ and ‘thin-skinned’ aspects of narcissism are also elaborated on in the role of projective identification in these narcissistic states:

Neuroscientific understandings of borderline and narcissistic structures and processes

Psychotherapist and clinical psychologist Clara Mucci has outlined those areas of the brain involved in the regulation of stress responses and emotion (hippocampus, orbitofrontal cortex, and amygdala), and how these are significantly affected in narcissistic and borderline disturbances. She shows how in these instances the orbitofrontal circuit system down-regulates mood and affects, such as regulation of self-esteem. A neurobiological model helps to illustrate how, due to the intense stress of early narcissistic injury, the developing brain cannot mature at its best due to this lack of essential self-attunement. Neuroscience also supports and illuminates a psychoanalytic approach whereby traumatic experiences that are not integrated by the ego remain as dissociated, highly charged somatic-affective fragments (see van der Kolk et. al, Traumatic Stress, 1996) which return as flashbacks and as key elements in the transference / analytic relationship. This coheres exactly with Jung’s concept of the traumatic complex (see West, 2016).

Mizen has examined the disorganised relational aspect of narcissistic and borderline traits, developing a ‘relational-affective model’. She explores “failures of symbolic functioning” though an incorporation of Panksepp’s pioneering research in affective neuroscience, showing how these disorganised relations manifest in two specific areas of the brain:

Issues of Image and Identity

Holmes has suggested that in the early aetiology of narcissism, the infant comes to identify with the observer of the self, getting ‘trapped ‘in the other’s gaze, which then becomes a repetition of this other. In this way, Holmes draws our attention again to narcissism as a developmental process, revealing the precarious process by which we try to develop a sense of self, a sense of self-belief, and a sense of agency – and the many possible disruptions to this process. See also Fonagy, Gergely, Jurist and Target’s (2002) understanding of the internalisation of the abusive other forming an alien self that cannot function in an integrated or well-adapted way.

This sense of being ‘trapped’ or fixated on another’s image of oneself is of course an aspect of the original myth of Narcissus, where it was also linked to an underlying theme of self-knowledge (in the story, Tiresias’s prophecy regarding the youth was that he would only live a long time “If he shall not know himself”). But as Holmes suggests, “Narcissus can never really know himself, as he cannot take a position outside himself’ – that is, he cannot ‘see’ himself accurately, as another does. For the same reason, Holmes notes, the Narcissus breaks hearts: he ‘cannot see’ his effect on others – the impact of his actions. Narcissists also attract other narcissistic people, perhaps hoping for ‘reflected’ glory: again, it’s all about sight, about being seen.

Mollon shows how this excessive investment in image (self-image) profoundly obstructs emotional growth and development, and relationships with others (see also Kernberg, and Kohut). Indeed, Kernberg regards this formation of a ‘grandiose self’ as a pathological fusion of the image of the real self, ideal self, and idealised other.

Mollon speaks movingly about what it might be like for an infant to be trapped or imprisoned in the distorting mirror of the mother’s or primary care-giver’s narcissism. He notes that differentiation of one’s self is “a crucial developmental achievement”, but that we are all, always, entangled in relationships and dependencies, and therefore vulnerable to a wide range of disruptions and fragmentation in our developing sense of agency, efficacy, and self-coherence (Link to Talk).